The Sydney Metro City & Southwest project will upgrade and convert all 11 stations between Sydenham and Bankstown to metro standards.

The T3 Bankstown Line is being upgraded and converted to metro standards between Sydenham and Bankstown with all stations to be fully accessible with lifts and level access between platforms and trains.

Sydney Metro City & Southwest will operate fully segregated from the existing Sydney Trains railway between Sydenham and Bankstown. The T3 Line west beyond Bankstown will continue to be operated by Sydney Trains, serving stations between Liverpool, Lidcombe and Bankstown.

This upgrade will address one of Sydney’s biggest rail bottlenecks, providing more reliable journeys for customers all across Sydney, as well as increasing accessibility at all 11 stations. The update includes:

Room for 100,000 extra customers across Sydney

Sydney Metro, together with signalling and infrastructure upgrades across the existing network, will increase the capacity of train services across Sydney from about 120 an hour today, to up to 200 services an hour beyond 2024.

After the conversion, metro trains from Bankstown will run at least every four minutes in the peak, or 15 trains an hour.

The metro network will be fully segregated from the existing Sydney Trains network between Sydenham and Bankstown, improving the reliability of services on the line. Interchange between Sydney Metro and Sydney Trains at both locations will be provided, with improvements to station way-finding and signage.

The T3 Bankstown Line creates a significant bottleneck for the existing rail network – it effectively slows down the network because of the way it merges with other railway lines close to the Sydney CBD.

By moving Bankstown Line services to the new stand-alone metro system, we can remove this bottleneck and provide more reliable journeys for customers from all across Sydney. 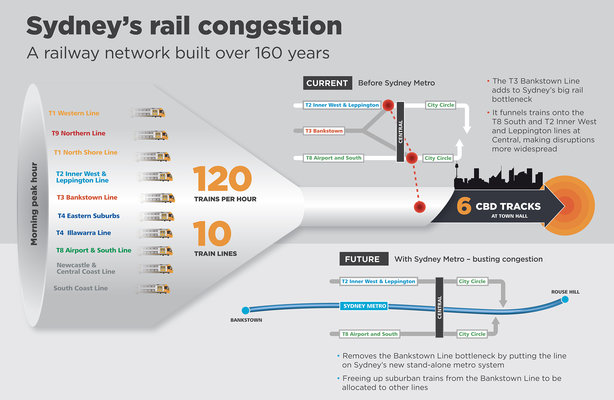 Built over 160 years, our railway network is one of the most complex in the world. Trains from 15 lines from all across Sydney compete for just six tracks, creating a bottleneck. Sydney Metro, a new standalone railway network, is the solution to clearing our public transport bottleneck.