When Sydney Metro is extended into the central business district in 2024, metro rail will run from Sydney’s booming North West region under Sydney Harbour, through new underground stations in the CBD.

There will be ultimate capacity for a metro train every two minutes in each direction under the city, a level of service never before seen in Sydney. Sydney’s new metro railway will have a target capacity of about 40,000 customers per hour, similar to other metro systems worldwide. Sydney’s current suburban system can reliably carry 24,000 people an hour per line.

Sydney Metro, together with signalling and infrastructure upgrades across the existing Sydney rail network, will increase the capacity of train services entering the Sydney CBD – from about 120 an hour today to up to 200 services beyond 2024. 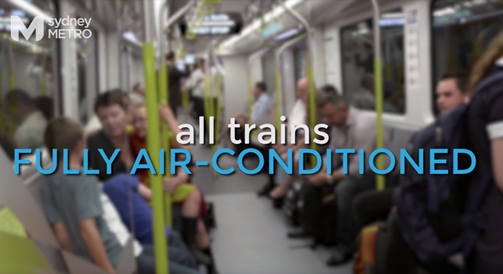 What Sydney Metro means for you

Customers are at the centre of Sydney Metro, including the 21st century design of new railway stations, interchanges and precincts.

Sydney’s first metro, the Metro North West Line, opened on 26 May 2019. Services at the 13 metro stations operate every four minutes in the peak in each direction on Australia’s first driverless railway. The line is being extended into the Sydney CBD to open in 2024.

For all operational information and service information, visit https://transportnsw.info/travel-info/ways-to-get-around/metro#/

The trial involves the planting and monitoring of more than 100 varieties of groundcover vegetation, with an emphasis on native plant species. The intention of the trial is to determine which plant varieties are the most resilient, require low levels of regular maintenance and prove to be a cost-effective alternative to conventional plantings.The findings from the trial will inform the design of other public landscapes across Sydney. View the Sydney Metro planting trials poster.

A 30 kilometre extension of metro rail from the end of Metro North West Line at Chatswood under Sydney Harbour, through new CBD stations and south west to Bankstown. It is due to open between Chatswood and the Sydney CBD in 2024.

Construction started in 2020, with the project on track to be completed by 2030.